We’re no longer living in the days where only celebrities with a million or more followers on social media can partner with brands to advertise on their platforms. And yes, while the “Kylie Jenners” of the world still make about $1,000,000 per post for a brand on Instagram, there are now new players in town for brands to consider for advertising.

What are micro-influencers, you ask? Most would define them as people on social media with online personalities, and followers ranging anywhere between 1,500-30,000 (exact follower counts vary based on who you ask). They almost always serve a particular niche, and as a result have highly engaged and loyal followers.

But most importantly, they're trusted.

Think about this: Let’s say you’re in the market for anti-wrinkle cream, and you see one of your “friends” post a successful ‘before and after’ of their face after using a specific brand’s cream. How much more believable is that post than if you were to see a major celebrity/movie star posting about the same cream. My immediate thought when I see a celebrity’s post in that situation is, “well there’s no way he/she is using that cream because they could afford the best dermatologists and skincare treatment in the world.” Am I alone in this??

As you have likely experienced in some form or fashion, these micro-influencers garner more trust than major influencers because they’re more relatable and have a preceived closeness to their followers that celebrities can't attain. And for this reason, marketers are getting smart and are now using these people to promote their products/services more than ever before.

So, why does this matter to nonprofits?

For the same reason that brands with products and services are partnering with micro-influencers who share their target audience, nonprofits are starting to do the same thing. And the best part of it all? They’re much more accessible and affordable (can I get an amen?) than the major influencers.

One important key to a successful partnership is to find micro-influencers who serve a niche that relates to your cause and shares a similar target audience. For example, if your nonprofit’s mission is to serve food to the homeless community in your town, it would be wise to partner with someone local who is known for their love of food and cooking. This quickly becomes a mutually beneficial relationship where you can tap in their followers who share a similar passion and the micro-influencer can reap the benefits of partnering with an incredible cause that he/she can adapt to their platform without straying from their niche.

How should nonprofits engage micro-influencers?


While there are many ways to find and start building relationships with micro-influencers, you can always start the process on social media itself. Search hashtags and see who is engaging on other pages that are similar to you and have the same type of audience. Be sure to first engage with their posts (don't just go straight to their inbox as soon as you find them): like their posts, comment and become familiar with what they do and who they are. That way, when it’s time to reach out with an invitation to partner and/or advertise with them, you are more trusted, and you can speak to what they’re passionate about.

Finally, once you have some new connections, be intentional with engaging them and offering some free benefits to the partnership (which will ultimately serve you well): invite them to tour your facility (and have them post about it), have them attend an event your nonprofit is hosting for free, or comp their tickets to a mission trip to see your nonprofit's work in action. Getting them immersed in a cause they care about will likely result in some great advertising and heightened awareness for your cause…and it’s much cheaper than $1,000,000 per post. ;) 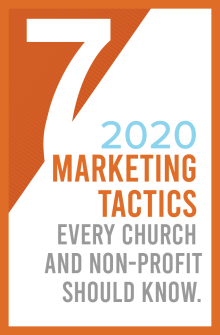